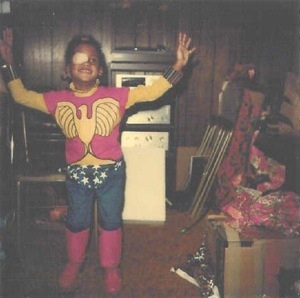 Okay, y’all.  I’m going to take a bit of a quick detour from travel-related stuff to share a story about my recent visit to the eye doctor.  Saints, I’m asking for prayers again.  In fact, just keep me on the list as it seems like I forever stay on the Potter’s Wheel.

I have never had great vision.  In fact, I’m pretty sure I came out the womb wearing a monocle.  Who knows?  At the age of 2, I was wearing soft contacts.  In fact, my Mom had to drive over to Childrens Incorporated (where I was left to fend for myself every day and fight for justice against other toddlers) to take my contacts out of my eyes before nap time.  She loves me, y’all.  I’m pretty sure my Dad would have just given me a cane and told me to figure it out.  He was practical.

Anyways…where was I?  After getting the soft contacts at the age of 2…my parents began to notice that my left eye started to drift off to the side while I was staring at something.  My Mom doesn’t play any games when it comes to this type of thing and I love her for it because I would be looking a hot, sizzling mess without her!  Turns out, I had what was commonly called “lazy eye” and had to wear an eye patch for a year to strengthen that “wandering” eye.  Seriously.  Like I was some sort of kiddie pirate.  Now, I’m going to share some pictures that I’ve claimed were burned up in a fire because I look less than glamorous 🙂  But, it’s necessary to illustrate my struggle.

This isn’t even Halloween…probably just a random Tuesday in March. Still rocking the patch and making it work as a Blind Wonder Woman.

There were no “breaks” from the patch.  I had to wear that sucker 24 hours a day/7 days a week…even during Halloween.

It worked and after couple of years, both eyes were facing front!  However, the effects of this have followed me all my life.  My left eye has considerably worse vision than the right one.  I’m used to it but it does require an explanation every time I have to go to a new eye doctor.  Luckily, I’ve had the same one for a few years now.  But, during my last visit, it seems as though he has taken up some sort of office stand-up comedy.

For example, I am sitting in the exam room waiting for him to arrive.  I’ve already taken out my contacts per their request.  He walks in the room and this happens:

Me: *looking in his general direction and rolling my eyes*

We then go thru the exam and I ask him to write me a prescription for new glasses since my old frames were broken.  He then looks at me like I had told him I wanted to fly to the moon and says, “you know that’s going to be expensive.”  Sir, I did not magically become blind today.  I know how much these glasses will cost!  But, bless him…he wrote a note for me to get 20% off.  Which was a good thing because I didn’t realize that the optical shop had turned into Kanye’s Blinged Out Eye Emporium.  After I picked out my frames and they rang up the total cost (including lens)…I think I blacked out for a few seconds.  I was like, “Wait…is that in U.S. dollars or pesos?”  Child!  I can’t even deal right now.  I just asked how much a whole new set of eyeballs cost because that has to be cheaper than these magical glasses made with moon rocks, unicorn hair and fairy dust.

Then I had to go get fitted for new contacts.  Y’all.  Just stop reading now and say another prayer for me.  I need it.

So I get a new contact prescription and they now carry it in soft contacts (I’ve been wearing hard and gas permeable lens since I was 13…and I’m now, um…older than 13).  So, the tech is showing me how to put the soft contacts lenses onto my eyes.  Now, keep in mind that I don’t have my contacts in and it’s already established that I am Rayletta Charles…but he proceeds to draw a picture of how to put them in then says to me, “Oh…you can’t even see this can you?”  Sir, I rebuke you and your artistry.  He should’ve just punched some holes in the paper and had me run my fingers over it like it was in Braille.  *sigh*

But at least I now have new glasses & contacts.  Now, I wait and go thru this again next year.  Keep me lifted up, y’all 🙂

6 thoughts on “The Trials & Tribulations of Blind Bartimaeus…I mean, Me”