Bonjour!  It’s day 3 and today was cold and overcast. We woke up this morning and went to our favorite cafe, Grand Cafe de Lyon, for our croissants & cafe au lait.  How am I going to live my life without this cafe near my home?  Clearly they need an Atlanta location [makes note to self to speak with manager about this].

We head out to see the Russian Cathedral before taking the train to Cannes (which is about 30 minutes from Nice).  As we are walking, I notice that almost every dog has on a designer outfit!  Seriously.  Let me ask you a question.  What dog do you know in the U.S. that is rocking a leather jacket????  Not Riley.  He wrote a blog post about dogs dressing up.  These dogs don’t wear plain little coats…they have designs and ruffles.  Like they are about to go on the runway at a Stella McCartney fashion show.  There is even a dog & cat clothing store.  I kid you not.  And, the dogs have the nerve to get attitudes if you stare a little too long…like they think you are about to steal their designer duds.  There is a dog in the apartment building we are staying in who barks as soon as you come into his line of sight.  But, I think that’s because he may be the poor relations around town since he didn’t havean outfit on.

Anyway, the train station is in the opposite direction from the promenade and the markets which we saw yesterday.  As we are walking to the cathedral, the “element” (you know who I am talking about) seems to be more prominent.  Maybe they don’t let them visit the nice part of Nice???  Anyway, it’s cold & rainy so I am focused on following the map to get to the cathedral.  I then start to notice that the area isn’t as pretty as other parts of the city but it has “character”.  However, my Mom stops me and asks, “Is this the ghetto? Why is dog crap all over the sidewalks?”  It was too much for her and I knew she was ready to hightail it back to the bourgeoisie part of town.  But I was determined to see the cathedral so she was going to have to talk to New Brenda and tell her to come on. LOL. 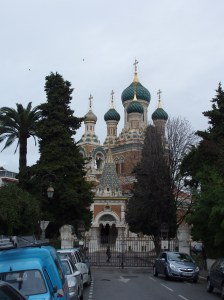 We finally find the Russian Cathedral and it’s nice…but not exactly what I expected.  I guess because it was in the ghetto?  I expected something a bit grander (and in a nicer area of town).  Kind of like expecting St. Peter’s Basilica in Vatican City and getting St. Mary’s Hold My Mule So Help Me God Church of Christ AME on Bankhead Highway.  But, it was still pretty.

My Mom and I start walking to the Nice Ville train station.  Now, I don’t know why I think things in Europe are different.  In the states, the Greyhound is always in a seedy part of town.  But, I thought that since the train I took from London to Bath was in the nice Piccadilly area, maybe that’s how they roll across the pond.  I guess they didn’t share the memo with Nice.

Then it happens.  We are waiting at a stoplight and suddenly some man almost knocks down a woman who is standing next to us waiting to cross at an intersection.  The lady was very dramatic about the whole scene and I recognized crazy instantly.  And, let me tell you…Nice has a whole new brand of crazy I ain’t never seen before (and yes, I had to use a grammatically incorrect sentence to highlight this fact).  My Mom was a beat behind since she thought it was just an ugly woman (he was a tad large and had man-breasts) but he had a buzz cut so I don’t know what she was thinking.  Being in the ghetto had her shook, I guess.

Anyway, Beat’em Up Bertrand (hereinafter known as “BUB”) dang near assaults a woman trying to rush to make the bus…and ends up missing it.  This is wear the C.R.A.Z.Y. comes out.  BUB decides he’s gonna cuss out the bus driver (or maybe just the bus because it was rolling down the street without poor BUB).  Then, once the bus is out of site…he decides to cuss out everybody else.  We are walking behind him and it’s like a bad car accident you just can’t stop looking at.  This fool takes his bottle of whatever (probably whiskey…you know crazy likes to stay bourre).  Oh, now “bourre” is my new favorite French word. It means “drunk” and is pronounced “boo-ray”.  You know I use it in sentences like, “I think he’s bourre’d” (because I don’t know how to conjugate in French so work with me).  That’s just how we do in Atlanta.  Anyway, Bourre Bertrand takes his bottle of spirits and THROWS it at a car that is pulling up to the intersection.  People are looking around at BUB but nobody says anything.  Not even the driver of the car.  They recognize he is bourre’d.  My Mom and I cross the street because that’s what my Grandmama told me to do when you see crazy.  He was out of control crazy. I don’t know what he was saying as it was in French but I have a pretty good idea because crazy people usually use the same 4 key phrases.  Maybe he should’ve walked over to the cathedral and talked to someone. 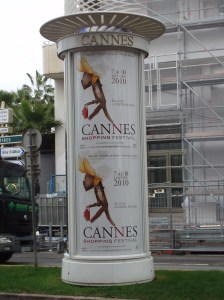 After witnessing the Battle of Bourre, we finally make it to the train station and are on our way to Cannes.  As I stated above, Cannes is about 30 minutes by train from Nice.  This city’s focus is on big money and shopping.  You won’t find a lot of museums.  But, the shopping and hotels are phenomenal if you can afford it (and sadly, I could not).  We went inside the Hotel Carlton (which I believe was the hotel used during the Cannes episode of “Entourage” but I need to double-check) and is the most famous address on the boulevard de la Croisette.  Rooms start at 750 Euro and go up to 5300 Euro. They embroider your name on the bathrobe and everything.  It really is a beautiful hotel. 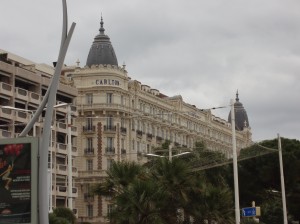 After leaving the Hotel Carlton, we went to see the Film Festival Hall where they show the movies during the annual Cannes Film Festival. 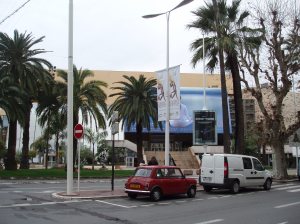 Afterwards, we ate at LaMocca restaurant which is across the street. I had the Tandoori Chicken & Coconut Mashed Potatoes.  I wasn’t sure how the mashed potatoes would taste with coconut but I’m always game to try something new.  It was delicious! My Mom had the antipasta dish which was tasty as well. 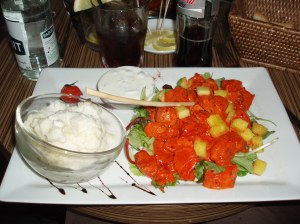 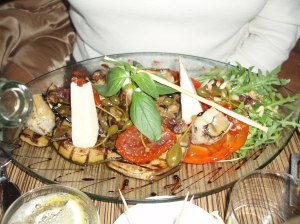 At this point, it’s getting dark so we head back to the train station.  The train back to Nice was delayed by 30 minutes so I felt at home since this is a normal occurrence on MARTA 🙂  After we finally get on the train…next thing I know, the metro police are rushing through the train.  Some guy is looking guilty…like he may be trying to get his 13 virgins or something.  At this point, I’m like, “Are you there, God? It’s me, Nikki. Tell Margaret to hold on because she’s been tying up the line for dang near 40 years! Please save me from crazy and the Taliban. Amen.”  I guess he heard my prayers because the final 20 minutes were peaceful.

We leave Nice tomorrow morning and head over to Monte Carlo so I can win big money at the blackjack and roulette tables (cross your fingers!).  Au revoir!!!