As-salamu alaykum from Morocco! The adventure has officially begun. In fact, it started on the plane ride to Casablanca. During our flight, 2 things happened. First, I started reading “The Cadogan Guide to Morocco” by Barnaby Rogerson. This guide has a bit more color than usual guides. For instance, Mr. Rogerson says the following about sexual attitudes in Morocco, “Moroccans also tend to think of themselves as immeasurably more virile & potent than Western men. However chaste your intentions, why not pack some condoms beside the sun cream and romantic fiction?” Really, Barnaby? Stop it. Second, I noticed 2 young men taking pictures with an older gentleman who had just come out of the bathroom. I guess he is famous…kind of looks like the Dos Equis man. But I wasn’t sure and didn’t want to ask less the young men wanted to borrow my romantic fiction. And, it would be my luck that if I took a picture with this “celebrity”, he’d end up being the Moroccan Ron Jeremy.

My Mom and I are doing an 8 day tour through the Imperial cities of Morocco. I customized the trip thru Journey Beyond Travel (I will provide a detail review and rating of their services after the trip ends…but so far, it’s been a fabulous experience). The typical Morocco tour packages last a minimum of 10 days. But, I like to do “taster tours” of new places/countries before I commit a long period of time to touring. JBT and I crammed a lot of stuff into 8 days. Our first day consists of a stick-and-move approach to Casablanca, Rabat, Meknes, Volubilis and Moulay Idriss. I will tell you now that this is not for the faint of heart. It’s a very long day (11 hours from the time we left the airport). 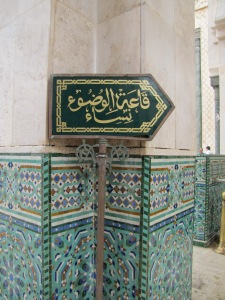 Our driver, El Haj (known as Haji) is waiting for us at the airport to drive us around Morocco for 8 magnificent days. The Casablanca airport is an experience…and a test of patience. Allow at least a couple of hours to get your bags and clear customs. Also be aware that people will try to “help” you with your bags (even if you are at the car…they will just want to put the bag into the trunk) for a tip. Do not allow this to happen if you don’t have any Dirhams. Trust me. They will demand that you provide them with some money…to the point of getting belligerent. Either politely decline their help up front or be prepared to pay 10-20 Dirham for their assistance.

If you are itching to quote Humphrey Bogart and say, “Here’s looking at you, kid.”…do it while taking the first road out of town. Otherwise, it’s not a city you want to dwell in. Casablanca is gritty. I’d describe it as a mixture of Cairo & Mexico City. It’s Morocco’s biggest city with a population of over 3 million people. In my opinion, the only thing worth seeing in this city is the Hassan II Mosque.

The Hassan II Mosque (named after King Hassan II) is the second largest mosque in the world (St. Peter’s Basilica can easily fit inside) and built partially on water. The largest mosque is in Mecca. It has the highest religious minaret in the world at 200 meters high. The mosque will fit up to 25,000 worshippers inside and another 80,000 in the courtyard. It is magnificent! This is also one of the very few mosques open for non-Muslims to visit. When you enter the mosque, you are given a plastic bag to store your shoes (as you are required to walk barefoot while visiting). As I stated above, the mosque is enormous with beautiful chandeliers and mosaics. In the center, you will see a glass floor that reveals the ocean below which is said to be a reminder of the Koran’s statement that God’s throne is upon the water. In the basement is an ablution room (where you cleanse yourself of your sins) and an absolutely beautiful hammam with a large pool.

The ablution hall has 41 fountains 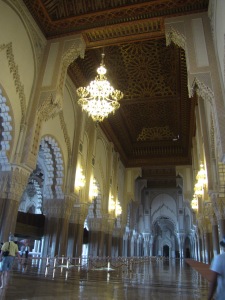 After leaving the mosque, Haji drives us to Rabat which is about 2.5 hours from Casablanca. Rabat is the capital of Morocco. We only spent 30 minutes here. Just enough time to visit the Mohammed V Mausoleum which houses the bodies of King Mohammed V and his sons King Hassan II and Moulay Abdellah. 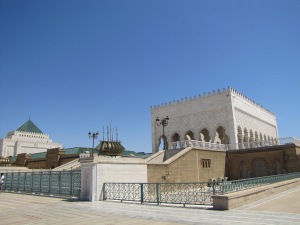 Next stop…Meknes. A popular day trip from Fes, this city is home to the many creations of Moulay Ismail. The most popular one is called Bab Mansour…which is a great gate. Its name comes from its architect (who was a Christian that converted to Islam). The local story is that the sultan inspected the completed gate, then asked El Mansour whether he could do any better. Which is a Catch 22 because when he answered “yes”, he was immediately executed (source, The Rough Guide to Morocco).

Sultan Moulay Ismail had great achievements (conquering territories within Morocco so that they were all under government control for the first time in 5 centuries). However, he was also known as tyrannical and basically blood thirsty. He began his reign by displaying 400 heads (mostly captured chiefs) in Fes. Over the 5 decades he ruled, it is estimated that he was responsible for over 30,000 deaths (not including those killed in battle). He was known to kill indiscriminately in order to keep his subjects on their toes.

If only Idris Elba were here. We didn’t really stop…just cruised right thru the town.

More Roman ruins. Seriously. If you have been to Italy…or really anyplace in Europe, you’ve seen ruins. These are no different. Volubilis was once the Roman Empire’s most remote base. Roman rule lasted just over 2 centuries. Most Roman cities follow the same layout (streets with stores & cafes, huge homes for the rich and brothels). Volubilis is probably most well-known for being the key location for Martin Scorsese’s film “The Last Temptation of Christ.”

As we were on the tour, the guide was telling us about the brothels. I started to tune out because it was hot and I was thirsty. Next thing I know, the guide asked me if I wanted to see the “pennies.” I thought he had moved on to telling us about currency. It was hard for me to understand his accent at times. So, I said, “sure.” Next thing I know, he has led me over to see this:

It was at that moment that I realized he had said, “penis”…not pennies. The best Roman ruins is in Pompeii. If you have been there, I would suggest you skip Volubilis.

Overall, the day was filled with a good mix of the highlights of Casablanca, Rabat, Meknes, Volubilis and Moulay Idriss. If I had to do it again, I’d probably spend more time in Rabat and skip Volubilis, Moulay Idriss and Meknes all together. Have you been to these cities? If so, what did I miss that is a definite “must see”?