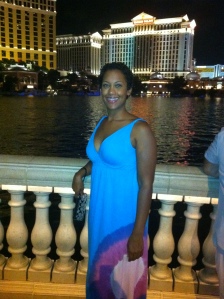 What happens in Vegas, stays in Vegas…unless it’s funny & juicy, then it’s shared on my blog!  And, have I got some stories for y’all.  My BFF, Isina, joined me in the big LV for the weekend and we had a FAB-U-LOUS time!

Of course, y’all know how my luck rolls so craziness greeted us at the airport shuttle.  Isina is now a firm believer in the fact that I am a crazy people magnet.

Airport Shuttle AKA “WTF?”
Sigh.  This is going to be pretty long so sit back and make sure you have something to snack on.  Isina and I arrive at the Vegas airport and decide to take the airport shuttle since it was $7 (a taxi probably wouldn’t have been much more but we didn’t know that at the time).  We arrive at the shuttle stand, buy our tickets and find the proper line.  There are about 15 or so.  The queues are organized by number.  You’ll have 2 queues per stand (i.e. signs for shuttles 1 and 2 are in the same section).

We head for the sign that says “2” and stand in the queue thinking a shuttle will be along shortly (because the line was fairly long).  Wrong.  After 20 minutes, a bus sidles on up and fills up pretty quick so we are left to wait for the next shuttle…which takes another 20-25 minutes.  We are now towards the front of the line.  It’s not complicated and we have just seen that the system can work.  But, it wouldn’t be my story if things worked out perfectly.  So, as the second shuttles pulls up, we work out a plan that I will stay in line to make sure the bags make the shuttle and Isina will save us a seat.  Well, a rogue line that I hadn’t been paying attention to (they were loitering over by queue #3) made a mad dash and rushed onto the shuttle so those of us who had stood in line were left out.  I was like, “Wait a minute.  What just happened?”

Then I had a revelation.  You know who have the biggest problems with habitual line jumpers?  Old people.  They can’t handle it.  I don’t know if it’s the fact that they feel their time on earth could be up at any moment or what.  But, they will bust a cap over someone cutting in front of them.  I had the pleasure of witnessing 2 such incidents.  It all happened when the bus driver (who is now opening the back of the bus to start loading luggage) stated that if you are in line, you aren’t getting on the bus and need to move your bags because the bus is full.  Why did he say that?  That set it off.

Mr. Vernon Dursley (I swear he looked just like Harry Potter’s uncle) got this wild eye look and was like, “OH HELL NO!  WE WERE HERE FIRST!”  But that didn’t make any waves.  Then, he was like, “THEY JUMPED THE LINE!  THEY WEREN’T STANDING IN LINE #2.  I TOLD THEM THAT THE LINE STARTED AT THE OTHER END AND THEY SAID NOT TO WORRY BECAUSE THERE WOULD BE ENOUGH ROOM ON THE BUS!!!  KICK THEIR ASSES OFF!!!  I DON’T HAVE TIME FOR THIS SHIT!!!  KENO DON’T PLAY ITSELF!!!  SHIT!”  The bus driver’s reply?  “I’M KICKING ALL THESE MUTHA FUCKAS OFF THE BUS!!!”  It was like he was speaking to himself but I was like, “Um, if you are kicking them off, does that mean there is room for us?”  Just sayin’.

Alas, he didn’t kick them off but he and Mr. Dursley started going at it.  Clearly, he doesn’t know how Mr. D can get…I mean, he made Harry live in a cupboard under the stairs for 9 years!  Get back on the shuttle, bus driver!!!  But, he decided to try his luck…because it’s Vegas, I guess.  Anyway, he disappears for a few minutes, then comes back and gets into it with Mr. D again.

Just long enough for another guy to show up.   This man had to be 104 years old if a day…he was wearing khaki pants pulled up to his nipples, a flowered shirt and had cotton in his ears…he was old y’all.  So, Father Time had been grinning and seemed to be in a happy place.  Then, it turned on a dime.  Another shuttle worker shows up to defuse the situation with the bus driver and Mr. D.  He’s a black guy who is probably in his mid-30s (who I will call Ice Cube).  So, as Cube is trying to calm down Mr. D, Father Time hops up and starts waving his shuttle receipt in Cube’s face and screams “WHAAAATTTT TTHHHEEE FUUUUCCKKK?”  I was like, “oh hell, here we go.”  Father Time then screams out “WHAT THE FUCK?  I’VE BEEN WAITING FORTY-FIVE MUTHA FUCKIN MINUTES FOR A MUTHA FUCKIN SHUTTLE AND IT HASN’T SHOWN UP MUTHA FUCKIN YET.  GIVE ME MY MUTHA FUCKIN REFUND BEFORE I FUCK YOU UP!”  Father Time is gangsta.  I wasn’t all that confident that he wasn’t carrying.

So, Cube was like, “Who the fuck is this old mutha fucka talking to?”  Then, he does something unexpected (and not very customer service friendly)…he starts screaming back at Father Time.  He says, “WHO THE FUCK YOU TALKIN TO?  YOU BETTA WATCH YO’SELF!  I DON’T PLAY THAT SHIT.  GET YO ASS BACK IN LINE OR GET THE FUCK OUT.  YOU AIN’T GOTTA TAKE A SHUTTLE…GET A FUCKIN CAB!!”  FT screams back, “GIVE ME A MUTHA FUCKIN’ REFUND AND I’LL TAKE A CAB.”  Cube, “AIN’T NO REFUNDS, BITCH (the bitch part was implied)!”  It just got really real y’all.

I was shocked that Father Time had such a potty mouth.  I mean, nobody knows when their time is up but when you are looking like Cocoon and clearly your number could be called any day…I just thought he’d be acting better.  You know how folks get religious when they get older to get a few more credits when they get to the Pearly Gates?  Like, “Hey Pete?  Can I call you Pete instead of Peter?  I mean, I feel like we’re boys since I read my Bible every day after I turned 50.  Can you tell Jesus I’m here?  Picked up my water at reception…just need him to turn it into some Chardonnay.  Thanks!”  Maybe Father Time had a slip up?  I mean, how are you going to explain the cuss out in Vegas to Peter???

Now, during this whole show, Isina had been looking for a taxi so she missed everything.  When she walked up, I calmly explained that she had missed a fight.  Because you don’t act all excited when crazy is close by.  You don’t know what could set them off again.  Kinda like earthquake aftershocks.

So, the shuttle finally takes off without us and the crazies on it.  That’s when Mr. D feels that he has found a friend in me and wants to talk it out.  Sigh.  Why?  This happens to me dang near every trip!  But, I listen as he explains what happened for the 10th time (like I wasn’t there when it happened or when he explained it the previous 9 times).  Here is a transcript of the convo:

Mr. Dursley:  DID YOU SEE THOSE PEOPLE JUMP THE LINE?  I TOLD THEM THAT THE LINE FOR SHUTTLE BUS 2 WAS AT THE OTHER END BUT THEY SAID IT WAS COOL AND THAT EVERYBODY COULD GET ON.  CAN YOU BELIEVE THAT?  THEY JUMPED THE LINE AND RUSHED ONTO THE BUS?  PEOPLE LIKE THAT ARE A MENACE TO SOCIETY.
Me:  You are right.  I can’t believe it.  It’s shocking.
Mr. D:  Karma is going to come back and get them bad.  They will lose at every game they play.
Me: *giggling because he is now the white Celie from The Color Purple…all that was missing was the hand gesture with the fingers*  You are right, ugliness never wins, sir.
Mr. D:  I’m calling someone about this.
Me:  Yeah, you can’t let this go.

After all of that, we finally get on the bus after Cube comes over and asks which bus we were waiting on.  As we are riding to the hotel, we see that the shuttle with the line jumpers had broken down right outside the airport.  Mr. D was like, “THAT’S KARMA BITCH!”  Glorious.