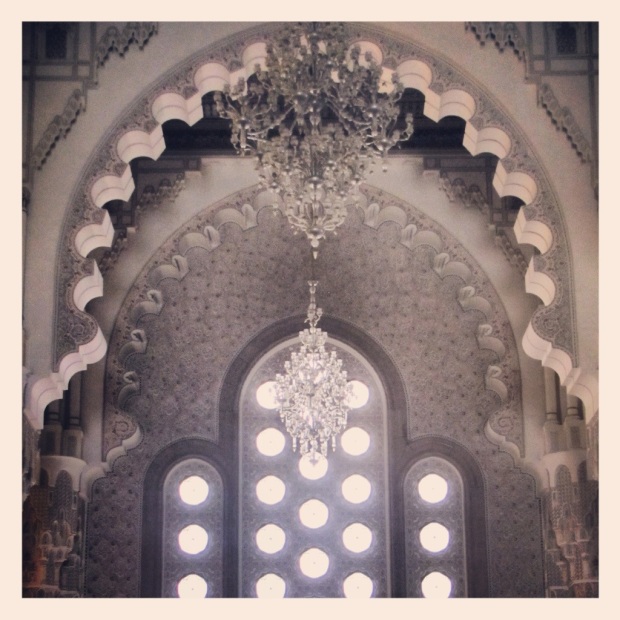 The Hassan II Mosque (named after King Hassan II) is the second largest mosque in the world (St. Peter’s Basilica can easily fit inside) and built partly on water. The largest mosque is in Mecca. It has the highest religious minaret in the world at 200 meters high. The mosque will fit up to 25,000 worshippers inside and another 80,000 in the courtyard. It is magnificent! This is also one of the very few mosques open for non-Muslims to visit.

When you enter the mosque, you are given a plastic bag to store your shoes (as you are required to walk barefoot while visiting). As I stated above, the mosque is enormous with beautiful chandeliers and mosaics. In the center, you will see a glass floor that reveals the ocean below which is said to be a reminder of the Qur’an’s statement that God’s throne is upon the water.

In the basement is an ablution room (where you cleanse yourself of your sins) and an absolutely beautiful hammam with a large pool.

Pool in the hammam 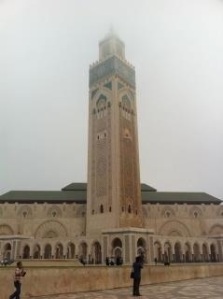 View of the mosque on a foggy day.

For me, the Hassan II Mosque was the highlight of Casablanca. If you visit Morocco, most international flights fly into Casablanca…my recommendation is to visit the mosque, then keep driving towards Marrakesh to start your adventure!