One of my favorite shots while strolling down Pusher Street (named for its former sale of soft drugs) in Christiania (a free-wheeling community of alternative living in Copenhagen). This place is fascinating…from the urban street art to the colorful people.

Ah, Københaven…what a fabulous city!  I spent 5 days experiencing as much as I could.  In my opinion, Copenhagen has a bit more “color” than some of the other Scandinavian cities I’ve visited (Oslo and Helsinki).  It reminds me a lot of Amsterdam with the vibrantly colored buildings & canals.

If you are on the fence about visiting the Nordics (or just never thought about it), I highly recommend you try visiting Copenhagen for the following reasons:

Big Mike and I during his wonderful bike tour!

Big Mike Bike Adventures.  By far, this was THE BEST thing I did in Copenhagen.  It was COLD (as you can see from my huge coat).  But it was so fun!  Mike is THE.BEST.EVER!  I promise that you will have a fabulous time.  We started off meeting up with him and a few others at his bike shop.  Once outfitted with our bikes, we started pedaling thru the city (which is super easy to navigate because of the bike lanes and motorists being used to navigating bicyclists).  We were able to see most of the city by bike, stop for hot chocolate and meet a lot of cool people.  Big Mike has a huge personality that is so fun & light.  He was a superb tour guide…I learned more about the Danish culture from him than my trusty guidebook!  I was also inspired by him as he is a cancer survivor and left his job in the corporate world to pursue his passion.  He truly is following his bliss.  I need to do that! 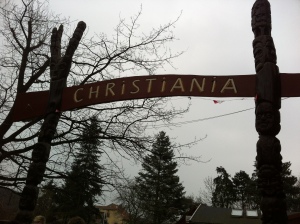 The Green Light District (aka “Christiania”).  Um…this is the “alternative-living” section of Copenhagen which is home to idealists, hippies, potheads, non-materialists and lots of kids & animals.   It was founded in 1971 when 700 Christianians established squatters’ rights at some abandoned military barracks.  This place is fascinating!  Locals build their own homes but don’t own the land (as it’s still owned by Denmark’s Military of Defense) and most use wood or gas heat (not oil unless you are a “luxury hippie”).  Since they don’t own land, they are unable to buy or sell property.  When someone decides to move out, the community decides who can move in to replace them.  This community has 9 rules…among them:  no hard drugs (but they do sell & use pot); no guns or explosives (I assume they don’t want you high and shooting stuff up…which if you are high, aren’t you pretty chill?); etc.

I was only able to get a few pictures as photographing is strictly prohibited once you get into the community…and should you miss the big sign (like I did); someone is there to promptly remind you.  As Renee & I walked down “Pusher Street” (named for the sale of soft drugs), we found ramshackle homes, cozy cafes, and lots of stalls with people selling different types of pot.  Then there were the outdoor areas with picnic tables where you could go and smoke to your heart’s delight.  It is clear that this is a place of freedom, free love, no taboos and no judgment.  And, it’s very popular…it’s the 3rd most visited place in Copenhagen!

Fitness.  If you are a runner or bicyclist, this is the place for you!  It seems that everyone works out.  With so many beautiful lakes, canals and trails, it’s hard to find a reason not to be outside taking it all in.  You will find a large number of people bicycling all day and night (the city is set up perfectly with bike lanes).  I was able to download 5 running routes (with distances between 3 – 7 miles) around the city.

Food.  It’s no secret that I love to eat.  And those that know me well are aware of the fact that I have to eat at Wagamamas if there is one in the city.  I fell in love with the Pan-Asian restaurant in Glasgow and make it a point to eat there whenever I see one since we don’t have one in Atlanta.  The one in Copenhagen was okay…not as good as the ones in London, Dublin or Glasgow.  To sample a bit of the local cuisine, I highly recommend brunch at a delicious restaurant called “apropos”.  They served a wide selection of culinary treats (French toast, eggs, bacon, pastries, mimosas, fruits…you name it).  There are 2 traditional Danish foods that you should try for lunch…Smørrebrød (which is an open-face sandwich) and pølse (basically a big hot dog).  Both are delicious!!!  If you are ever in Copenhagen, you must check it out! 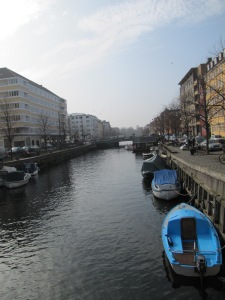 Canals & Colorful Buildings.  We spent hours walking around the different sections of Copenhagen…taking in the colorful buildings, lingering on bridges over canals and marveling at the beauty of it all.  Some big cities are so congested and vanilla but others have such character that you can’t help but stop to take it all in.  I suggest taking a stroll thru Nyhavn (“New Harbor”) which is new gentrified harbor with beautiful canals filled with glamorous sailboats of all sizes.  It has trendy cafes, tattoo shops and jazz clubs to hang out while enjoying a cup of java or juice (which is really big in this city).

Sights.  There are so many things to see and do while visiting.  Check out Copenhagen’s amusement park, Tivoli Gardens.  Or the Rosenborg Castle & Treasury, Christiansborg Palace, Danish Jewish Museum…or plenty of others.  As per my usual routine, I brought along my Rick Steves “Scandinavia” guidebook which was very helpful in organizing which sights were “must sees” vs. “if you have time, check it out”.  It seems like I am forever visiting places of worship on every trip I take (Shout out to Jesus!  See?  Just because I don’t always go to church in the states doesn’t mean I’m not thinking about you :)).  We ended up at a very cool church called, “Our Savior’s Church” which has a Baroque design to it.

Have you been to Copenhagen?  If so, what were your favorite sights/things to do?

The Radisson Blu Scandinavia hotel (located at Amager Boulevard 70 in Copenhagen, Denmark) is 8 kilometers from Copenhagen’s Kastrup airport and about a 5 minute walk from the Islands Brygge Metro station.  This hotel has 26 floors (500 guest rooms and 42 suites that feature 7 different styles), four restaurants, a bar and a casino (billed as the largest in Northern Europe).  I spent 5 nights at this wonderful hotel and would definitely visit again.

Denmark is on the Danish Kronor (DKK) so for those of us with weaker currency, it makes fiscal sense to take advantage of the promotions.  I highly recommend pre-paying for hotels that have offers which include breakfast (if your travel schedule is not subject to last minute changes).  As a general rule, I would not recommend pre-booking a hotel too far in advance (at max, a month or so) just because you never know what can happen (i.e. the hotel goes out of business or starts a major renovation that will affect the quality of your stay).  Breakfast tends to be pretty expensive unless you can find a cheaper alternative nearby (although there is a gas station next to the hotel which sells pretty tasty pastries for cheap).  By booking ahead, you can save up to 20% on the hotel’s current rates.

Rooms & Suites
There are 5 types of rooms available:  Standard, Business Class, Junior Suites, Scandinavia Suites and Family Room.  The Standard & Business Class rooms are all the same size and have almost the exact same amenities with the exception of the Business Class rooms being on the upper floors and having Nespresso coffee machines.
I booked a Standard room but was upgraded to Business Class (on the 17th floor) and it was wonderful!  The view is phenomenal and the room was really comfortable.  Very contemporary and updated. 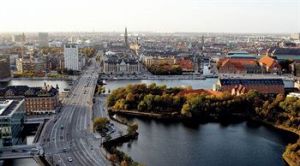 view from the hotel room 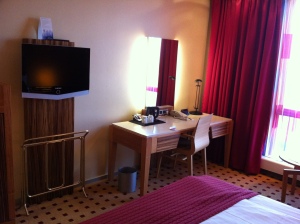 The hotel offers a decent-sized gym (which is free) and 2 squash courts.  Now, since you don’t know me, I could say that I worked out at this gym everyday but my pants are screaming out, “LIAR, LIAR PANTS ON FIRE FROM FAT THIGHS RUBBING TOGETHER.”  So, let’s just say that I did check it out and leave it at that, k?  It is one of the better hotel gyms I’ve been to though.  The Spa offers aromatherapy & Scandinavian massages, facials, reflexology and ear acupuncture.

There are 4 dining rooms — Kyoto [Japanese], Mamas & Papas [American and Italian], The Blue Elephant [Thai] and The Dining Room (which is on the 25th floor).  I ate at 2 of the restaurants (Kyoto and Mamas & Papas).  Overall, I found the food to be pretty good.  The wait staff is helpful and accommodating.

I found this hotel to be comfortable and a great value.  I didn’t try the casino as I refuse to pay to go gamble and Denmark was kind of expensive.  The rooms and food were pretty good and the location is excellent.  You are pretty central to most of the attractions (Christianshavn is just across the lake, and City Hall & Tivoli Gardens is a 10 minute walk away).  Copenhagen is a beautiful place to walk (or ride a bike) and this hotel is perfectly situated.